Difference between revisions of "Dogcow" 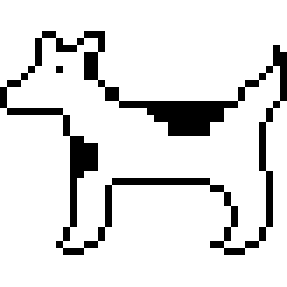 The dogcow began life as a bitmap glyph mapped to the "z" character in the Cairo font designed by Susan Kare. It is so named because it is difficult to tell whether the small, pixellated animal is a dog or a cow. When Apple needed an icon to demonstrate printing orientation, it was selected to grace the printer dialog box. In Apple folklore, the dogcow had taken on a life of its own, by acquiring a name (Clarus[1]) and a characteristic sound (moof!). Indeed, the Apple manual describing the file server controls in AppleShare 3.0 uses "Moof!" as a sample string in a

Clarus has featured in a number of pre-OS X Apple applications as something of an 'easter egg'. Amongst these applications are Disk Copy and HyperCard. In the former, an animated Clarus has been used as an alternative to the ubiquitous watch cursor, since version 4.2. As for the latter, Clarus can be found in the HyperCard 1.2.2 Art Ideas stack, where she features as a generic icon next to the Animals, Wildlife, Fish... category. She is also present amongst the graphics featured in that category. A slightly more obscure reference to the dogcow can be found on page 26 of Apple's AppleShare 3.0 File Server Controls manual[2]), where "Moof!" is used as a string value in a function written in Pascal.