Deprecated: The each() function is deprecated. This message will be suppressed on further calls in /www/vhosts/wiki.68kmla.org/htdocs/includes/MagicWordArray.php on line 206
 MÃ¦lstrom - 68kMLA Wiki 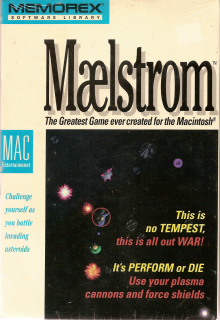 Maelstrom is a 1993 clone of Asteroids with improved graphics and interface. It was created by Andrew Welch, president of Ambrosia Software, and led to the formation of that company. Many of Ambrosia's subsequent shareware titles followed a similar formula.

At the time of its release, Maelstrom took full advantage of the Macintosh's multi-media capabilities and broke ground for further developments of the platform in the "anti-productivity software" arena. While quaint by today's standards, Maelstrom is still enjoyed by many players and, for a large group of people, was the first Macintosh game they played. In 1993, Maelstrom received the Shareware Industry Award for Best Game. It was created using THINK C and uses 18,000 lines of C code with 9,000 lines of inline assembler.

More recently, Ambrosia Software gave the source code away to Sam Lantinga, who created a GPL port that runs on many operating systems, such as Linux, Mac OS X and Windows.

Maelstrom is played as a 2D overview in a section of space. The object of the game is to reach the highest score possible by shooting asteroids with a plasma cannon from a spaceship that the player controls. The ship can move in any direction across the screen and also has a limited amount of shield. The player may also pick up powerups throughout the levels or "waves" and encounter unusual objects and enemies throughout the game.